Introduction to Talmud and Midrash 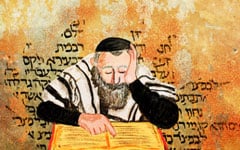 Introduction to Talmud and Midrash

A. Course Description
HIS-102 will introduce the student to Talmud and Midrash. We will learn the history, structure, and purpose in study. The course will include both Babylonian and Jerusalem Talmuds as well as the Midrash Rabba. The various contributing Sages will be examined. Actual pages of Talmud will be studied.

C. Requirements for Credit
Passing grade of 75% or more on all quizzes and oral exam.

D. Grading Scale:
There will be lesson quizzes that are part of your grade. In addition, students will be required to take an oral exam by Skype given by Rabbi Bernstein.
Grading will be on the numeric scale: 90-100 A, 80-90 B, 75-80 C, below 75 F.

E. About the Instructor:
Steven A. Bernstein was raised in a Conservadox home in Gainesville, Florida. His parents were visiting Professors at Hadassah Medical School in Jerusalem, so, Steve lived there in 1974-1975. Steve studied Philosophy and Judaic studies at Duke University and received his BA from the University of West Florida. Steve was given his first Smikha in 2010. Since then, he has been the Rabbi at Aydat HaDerekh Messianic Synagogue in Fort Myers, FL which is affiliated with the UMJC and the IAMCS. He received Smikha with the IAMCS in 2015. He is an instructor of Jewish History with Yeshivat Shuvu. Rabbi Steve lives in Estero, FL with his wife, Roni.