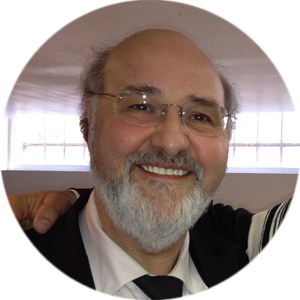 The Messianic Rabbi, Emmanuel Rodriguez-Perez was born in Oran (Algeria) in 1960. During his teenage years, he led a tumultuous life, marked by violence. It is in this context that he had an unexpected and miraculous experience that will mark and transform his life; he discovers and realizes that Yeshua is his Messiah. Touched by this experience, the purpose of his life will become to make his Messiah known.

After 5 years of theology, he was consecrated pastor and exercised this ministry for 10 years in Yverdon and Neuchâtel. Following a call from the Lord in 1997, he returns to France as Rabbi of the Messianic Synagogue El-Bethel in Paris. In 2007, he was consecrated Messianic Rabbi by the IAMCS, after having followed a course in Messianic studies from 2000 to 2007. He also decided to continue his Talmudic and Rabbinical studies from 2008 to 2015.

He is also responsible for and directs two Messianic Yeshivot (Jewish study center) in Geneva 8 years ago and 4 years in Chavornay, bringing together Jews and non-Jews in the Messiah.

Emmanuel and his wife Corinne, are the parents of 4 wonderful children and a 14-month-old granddaughter.